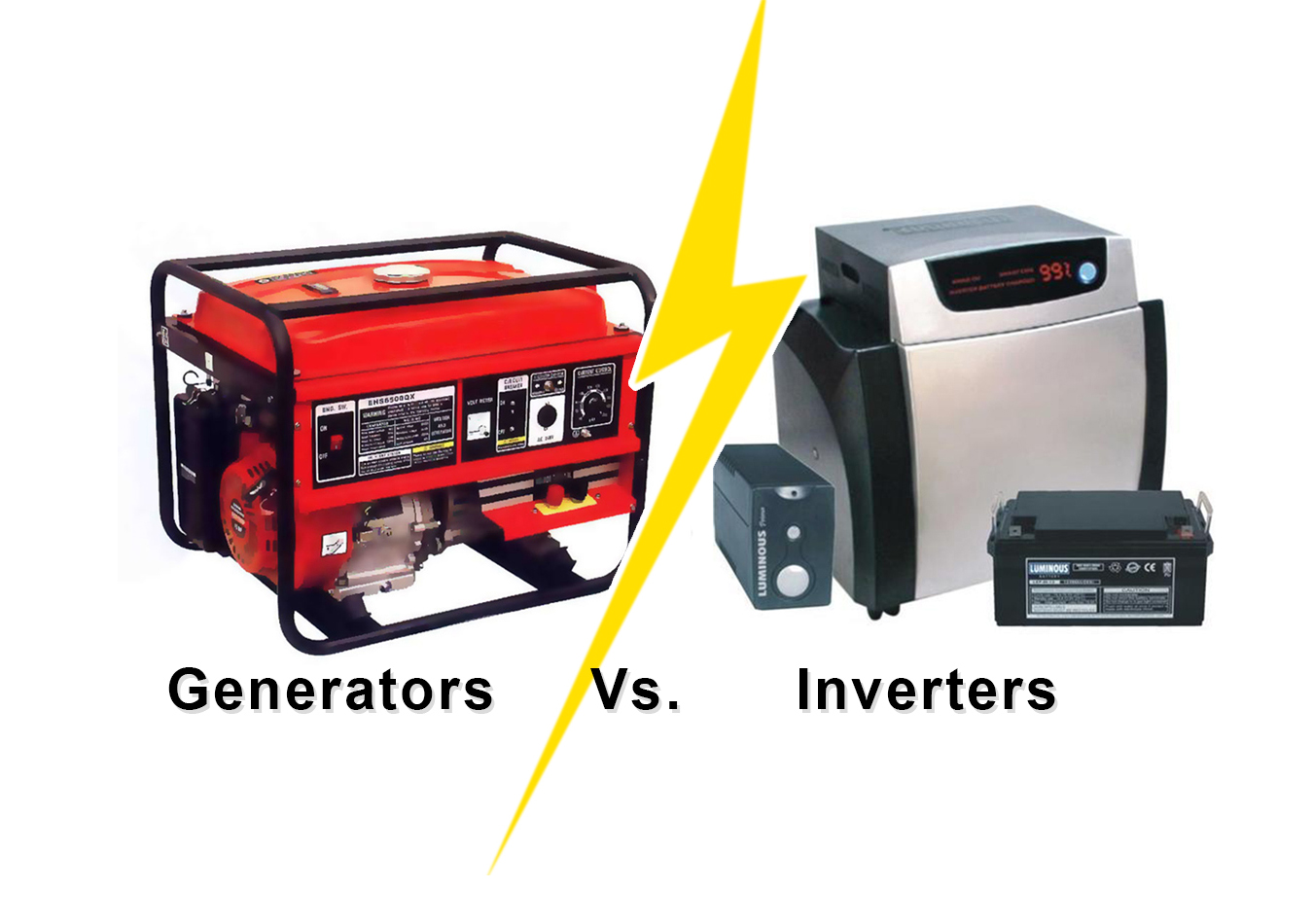 This is a reader-supported website. By clicking on product links, you help us keep producing independent objective analysis at no cost to you. Thanks for your support!

Installing a generator in your home or office can help you deal with a variety of situations that range from outages to blackouts. Over the years, many companies have launched new models for the convenience of their customers.

However, these advancements in technology have given birth to a new debate, i.e., inverter vs. conventional generators.

If you are looking for the same answer, then we are going to help in the best possible manner. Our team has a lot of experience with both types of generators, so we can help you make the best decision.

What are conventional generators?

A conventional generator is a basic version of a generator that produces electricity using a fuel-powered engine. The major types of fuels commonly used in a standard generator are diesel and propane. Additionally, there are lots of models that are hybrid and can work with both gasoline and propane.

They are used in homes as well as businesses today. The motor of these generators usually operates at a constant engine speed of 3,600 rpm for producing the required electrical energy.

However, there are strong chances of fluctuations in voltage and hertz that are considered major disadvantages in a conventional generator. This is known as a harmonic distortion in the electric world.

The reason these generators cannot offer clean electricity is because of the consistent changes in high harmonic distortion. Nowadays, it is strongly suggested to use a clean form of energy for sensitive equipment like DSLR cameras, laptops, smartphones, etc.

On the fence about conventional generators? Take a look at some of its advantages:

The main reason people opt to buy a traditional generator is its low price. It doesn’t hit the pocket too hard in terms of buying price and maintenance costs. They have a very simple operation that helps in keeping the overall costs low and manageable.

The number of working components in a conventional generator is very few, which allows it to maintain simplicity. The major components are the engine and alternator, and these help to ensure very fewer failure points. The construction of these generators is quite easy to understand, and anyone can operate it quite efficiently and easily.

What are inverter generators?

Inverter generators have become a pretty popular option in recent times due to their impressive technology. They are capable of transforming a direct current into an alternating current quite easily. There is a pretty amazing and harmonious voltage created after the conversion process has finished.

The voltage fluctuations are prevented to a greater extent, with the availability of inverter technology. The electricity produced is clean and considered perfect for sensitive equipment. It makes sure the users can connect their electronic equipment without too much hesitation.

The majority of inverter generators are crafted to have a more compact design that boosts mobility and flexibility. This design results in wonderful sound insulation properties in the area. It is the main reason that these versions of inverters are quieter in operation.

That is not all; you can easily find models that come with an eco-friendly mode that makes sure the speed of the motor can adapt as per the required output power in an optimized manner.

Now, let’s get a closer look at the advantages of running an inverter generator in the home:

Again, a conventional generator works at a consistent speed for providing the needed frequency. It makes sure that the generator operates at 3,600 rpm, which keeps the consumption of fuel on the higher side. However, inverter generators can adjust their load and can result in minimizing fuel consumption.

The inverter generators create a little bit of zero noise during the operation. They come with eco-throttle that helps in minimizing the noise levels to a greater extent. The engine of such generators runs according to the requirement of load that let it work quietly for most of the time. Additionally, the majority of models come with special sound dampening materials and fully silent engines that also play a greater factor in reducing the noise.

The level of portability offered by an inverter generator is something that a traditional generator can never match. They are lightweight in construction and normally equipped with carrying handles and even wheels in many models. The reason behind the small size of an inverter generator is its small fuel tank. Carrying it from one place to another other is an almost effortless task.

Another thing that goes in favor of an inverter generator is its ability to produce super-clean electricity. There are small chances of minimum fluctuations as the frequency stays steady during the complete run.

If you understand electricity graphs, then you can see an inverter generator can develop a perfect sine wave without too many visible scratches. All these things make it completely safe for connecting with sensitive devices like medical equipment, mobile phones, and computer systems.

A basic inverter generator normally holds between 2,000 & 4,000 watts of power. Although, this can be almost doubled using the parallel ability technique.

For those who don’t know, a parallel inverter generator can be made a connection with another inverter generator to boost the power ability without any requirement of the transfer switch system. The presence of such an enormous power source makes them a perfect option for home backup power.

Why are inverter generators quieter?

Inverter generators are quiet because of the new technology that is used so that they can produce clean electricity. The engines of these generators are also smaller, have a lower power output, and all of this also lends to its overall noise levels.

Can an inverter generator run a refrigerator?

This kind of generator converts DC power into 120 volt AC power, which allows it to run appliances in the home, including a refrigerator. You can purchase an inverter generator in different power capacities, with some being powerful enough to do this.

What are the Major Differences Between Conventional Generators and Inverter Generators?

Let’s talk about what really differentiates the conventional and inverter generators. We have created a table that will surely help you in gaining valuable knowledge about this perspective.

We have definitely given you a ton of information regarding inverter generators vs. conventional generators and their differences. So, to help further break down those differences, we have broken down these generators by their current, power and fuel efficiency, portability, noise level, parallel connections, emissions, and price.

When is investing in a conventional generator, the right thing to do?

We have already told you about the advantages of both conventional and inverter generators in detail, along with sharing the differences between the two. However, our team believes that many of you might still be confused about which one to choose.

If your area does not have longer outages or blackouts due to storms, then it will not be a wise option to invest in a conventional generator. There is no need for this kind of immense power for occasional power cuts. However, you definitely need a great source of power if storms and blackouts are common in your area.

Nowadays, many models in the market come with track wheels for adding convenience while moving the generator from one place to another. You should buy a conventional generator if high-level energy is needed for an extended time.

When to choose an inverter generator?

The main thing that makes an inverter generator a better option is their low noise and ability to produce clean power. Also, you need to keep one thing in mind that it cannot produce too much power. If your area normally has casual power cuts, then going for an inverter generator is the perfectly right option.

In addition to home use, they are also an incredible option to choose for outdoor activities like trekking, beach camping, etc. The reason behind that is their lightweight construction and better fuel efficiency. That is not all; you can also think about choosing an inverter generator if there is usually a need to charge sensitive devices like laptops, medical equipment, etc.

On the other hand, there is an array of advantages possessed by an inverter generator, but with certain limitations. So, it is all up to you which one perfectly suits your needs.

How Best to Care for Adirondack Chairs? Both Wooden and Polywood

Why Buy Trex? Is It Better than Wood?

How Long Can a Well Maintained Wooden Adirondack Chair Last?